Star Wars Rebels Executive Producer Dave Filoni proves once more that he’s the gift that keeps on giving by sharing a brand-new piece of Ahsoka Tano art… on his birthday, no less.

Ever since the debut of the Star Wars Rebels season 4 trailer back in April, there’s been endless speculation about the mysterious white wolf that appears in several of its scenes.

One popular theory that’s been making the rounds for the past few months is that that white wolf IS Ahsoka, that she had simply transformed into the giant creature following her “death” at the hands of Darth Vader. Some point to Tolkien’s Gandalf the Grey – and Filoni’s own love for the Tolkeinverse – as proof that Ahsoka the Grey sacrificed herself in battle against Darth Balrog and has since evolved into Ahsoka the White… Wolf.

Some fans kept their feet on the ground and mused that the white wolf was just Filoni’s way of bringing his beloved Canis lupus into Star Wars.

It wouldn’t be his first attempt to do so. During the Ahsoka’s Untold Tales panel in July 2016, Filoni spoke of his love for the classic Miyazaki film, Princess Mononoke, and admitted that he had brainstormed a scene where Ahsoka would have escaped from a squad of Clone troopers with the help of some giant forest-dwelling wolves. Eagle-eyed viewers will also have noticed depictions of wolves scattered throughout The Clone Wars and Star Wars Rebels, most notably on Mortis and on the walls of the Jedi temple on Lothal. Not to mention Commander Wolffe and the Wolfpack…

And then there are those, such as myself, who believe the wolf to be a messenger of sorts, a way for Ahsoka to communicate with the Ghost crew from beyond the nether realm (think of it as an alternative to a Force ghost).

This explanation may have been hinted at as early as last summer, when Topps released a series of exclusive art depicting Ahsoka’s journey through the underworld. These ten digital cards have given fans ample food for thought and some, such as Johnmarie Macias of The Wookiee Gunner, have attempted to decipher the subtle clues and iconography hidden within these miniature works of art.

There are numerous ways to interpret that final card. My personal take on it: It shows Ahsoka trapped in some sort of Force netherworld (or nexus). Those wolves circling her may be her messengers (or proxies) in the physical world, much like the Norse god Odin’s twin ravens, Huginn and Muninn.

That said, mythology abounds with tales of shape-shifting gods and tricksters so one could argue that Ahsoka’s simply developed the ability to shape-shift into a giant white wolf at will. But Filoni’s latest artwork seems to put paid to that theory by confirming that Ahsoka is, in fact, “not the wolf”. She’s even labelled as such. Clear as day. 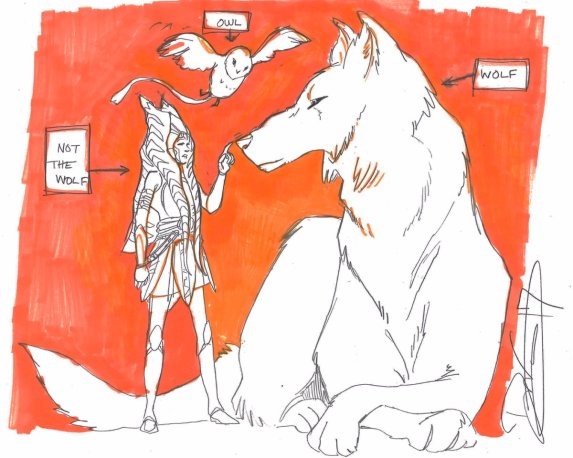 Ahsoka “Not the Wolf” Tano hangs out with her animal buddies.
(Image credit: Dave Filoni)

Of course, it’s pretty obvious what’s actually going on in this image: Ahsoka finally swapped her beloved pony farm for a petting zoo. 😉

So, does Filoni’s latest masterpiece spell the end of yet another wild fan theory? Or is this just an intentionally cryptic sketch to keep us entertained while we wait for season 4?

Tune into Star Wars Rebels this autumn to find out what really happened to Ahsoka Tano!

Kelly M is a 'Star Wars' fan hailing from Gibraltar and currently residing in the Netherlands. Translator and editor by day, blogger by night, you can find her on Twitter under the name @teamahsoka.

There's a bunch of new articles up on the Team Ahsoka site, including a rundown of my favourite moments from last year's Star Wars Celebration Clone Wars panel. Read them by visiting the link in my bio! #StarWars #AhsokaTano #AhsokaLives #TheCloneWars
A belated happy new year to all of my followers! Apologies for the inactivity these past few months. Real life issues got in the way but Team Ahsoka is now back with a vengeance. 😉 And don't forget that the new season will be starting on Disney Plus on 17 February! #StarWars #TheCloneWars #AhsokaTano #AhsokaLives
Ahsoka's sole appearance in the "Star Wars English-Japanese Dictionary for Jedi Knights", an illustrated bilingual dictionary which is geared towards Japanese junior high school students who are learning English. #starwars #japanese #prequeltrilogy
Finally have some free time to get back to Claudia Gray's latest masterpiece, #MasterAndApprentice. If you're a fan of the prequel era, do yourselves a favour and get yourselves a copy. 📚 #StarWars
Got this adorable Porg tote bag from a friend of mine! 😍😍😍 #StarWars #Porgs
How awesome are these custom-built Clone Wars BrickHeadz figures by ScoutTheTrooper? Read all about them on the Team Ahsoka site (link in bio). #StarWars #TheCloneWars #AhsokaTano #AnakinSkywalker #ObiWanKenobi #LEGO #BrickHeadz