It seems like an eternity has passed since we first learnt Ahsoka Tano would be getting her own young adult novel. But after months of waiting and endless speculation, the wait is finally over. Which leaves one big question: Does E.K. Johnston’s novel live up to the hype?

Before I dive in, I’d like to say a massive “thank you” to Johnamarie Macias ofThe Wookiee Gunner for sending me a copy of the Ahsoka ARC for review. This release-day review would not have been possible without her!

Now onto the review…

Spoiler warning: The following review contains some minor plot spoilers for E.K. Johnston’s novel. If you don’t want to spoil the novel for yourself, do not scroll past this point. You have been warned! If you want to know whether you should buy this book, click here to jump straight to the spoiler-free verdict.

It’s been a year since the Siege of Mandalore and the execution of Order 66. A survivor of the Jedi purge, Ahsoka Tano is carving out a new, unremarkable life for herself as “Ashla”, a mechanic, on the dusty Outer Rim planet of Thabeska. When circumstances force her to leave Thabeska, she decides to settle on the remote farming moon Raada, where she befriends a group of local youngsters.

However, when Imperial forces move in to occupy Raada and use it for food production for the Empire’s growing army, Ahsoka’s new friends decide to take matters into their own hands and it’s not long before Ahsoka finds herself dragged into their resistance movement.

As the rumours of Ahsoka’s Force powers begin to circulate and her involvement with the local rebellion grows, it attracts the attention of Senator Bail Organa…as well as that of an Imperial Inquisitor.

I may be stating the obvious here but it helps if the reader is already familiar with the titular character. While Johnston does a commendable job of exploring Ahsoka’s background and psyche, the book isn’t intended to be a beginner’s guide to Ahsoka. References to past events or relationships will simply fly over peoples’ heads if they’ve never watched The Clone Wars or (to a far lesser extent) Star Wars Rebels, so the emotional impact of certain pivotal scenes may be lost on them completely.

I’d therefore be somewhat reluctant to recommend Ahsoka as a gateway novel to those taking their first tentative steps into the wider world of the extended Star Wars universe. That’s not to say your average reader can’t pick it up and enjoy the book for what it is. But they’d certainly get a lot more out of it if they’ve watched the TV series.

Accessibility issues aside, Ahsoka’s major flaw was its pacing, particularly in the first half of the book. After an adrenaline-pumping prologue set during the Siege of Mandalore, the action slows down almost immediately. We’re gradually introduced to the book’s key secondary characters, made to watch Ahsoka set up shop on Raada, and then wait for the action to ramp up again.

Granted, we did get to learn an awful lot about the small moon, its local community, and Ahsoka’s struggle to adjust to ordinary life, but there were a couple of times where I found myself wondering when the story would pick up the pace again. Time that could have been spent fleshing out the origins of the Rebellion or delving deeper into Ahsoka’s life in exile was (in my opinion) misspent on describing board game sessions, agricultural equipment, and other seemingly pointless minutiae. That said, I can’t really fault the author for her devotion to world-building.

The story really begun to gather pace in the final third of the novel, by which point there seemed to be almost too little time left to wrap up all the loose threads. A shame as this was when the novel finally went from “good enough” to “absolutely amazing”.

And then it was all over.

This is perhaps not so much a criticism of the author’s work per sé as it is a case of the book not fully living up to my expectations. I certainly didn’t expect the novel to cover the entire time period between Order 66 and Ahsoka’s appearance on Rebels – that would be unrealistic – but I had hoped to learn more about her initiation into the fledgling rebel movement and her first real mission as a Fulcrum agent. Johnston’s story, while decent, was a little too narrow in scope and time-span for my liking.

Another major downside was the lack of truly compelling secondary characters. This may just be an unfortunate side-effect of having read Claudia Gray’s novels quite recently but Johnston’s secondary characters all came across as, well, a tad generic. Perhaps this was her intention. Much of the story takes place on a remote farming moon in the Outer Rim so it only seems natural that most of the people Ahsoka encounters are the galaxy’s equivalent of your average Joe.

But in any case, I can’t really say that any of these new characters – even the book’s chief antagonists – made any lasting impression on me. If I’m totally honest, I’d already forgotten most of their names before I started working on this review and, for whatever reason, I had a tough time visualising many of these new characters. This is one instance where a Claudia Gray-style fan cast would have been extremely useful…

Update: E.K.Johnston posted this fan-cast on her Tumblr blog after I published this review.

Snips has proven herself to be quite capable at coping with life’s challenges… and she continues to do so. (Image credit: Cap-That)

And now that all my major complaints are out of the way, let’s focus on what the novel does *well*.

Her original characters may not be as charismatic or as memorable as those found in other recent Star Wars novels but Johnston shows a certain aptitude from capturing the spirit and idiosyncrasies of some of the characters we are already familiar with, whether it’s Bail Organa, Maul, Anakin Skywalker, or Obi-Wan Kenobi. This author is relatively well versed in Star Wars lore and her character explorations were a joy to read.

LGBTQ+ fans will probably appreciate Ahsoka’s new friend, Kaedan Larte, though I felt she was a little underdeveloped, especially for someone who helps drive part of the narrative in the later chapters. That said, it’s great to see some representation in this novel and it’s hardly my place to decide whether or not she is a good example of LGBTQ+ representation. The important thing is, a subset of the Star Wars fandom will see themselves reflected on the page and that’s all that matters.

If you’re worried that the author may have failed to capture Ahsoka’s voice, don’t worry too much. Johnston seems to know what makes Ahsoka tick and while the former Padawan comes across as a little too reserved and emotionally distant at times, she’s still got that trademark snippy attitude of hers and her selfless heroism shines through when push comes to shove. That said, there are times where Ahsoka makes some baffling out-of-character decisions or remarks and, dare I say it, I think Johnston should have paid closer attention to the advice Dave Filoni was giving her during the writing of this novel.

Is Johnston’s Ahsoka the same as the one we saw on The Clone Wars? Not entirely. We’re looking at an Ahsoka that has survived Order 66 and a full-scale civil war on Mandalore, a teenager who has lost her entire support network (including her closest friends), lost her sense of purpose, and has had to suppress her true nature and identity to protect herself in an increasingly cruel and hostile galaxy. These traumatic events have had an enormous impact on Ahsoka and it shows. Much of the book is centred around Ahsoka’s inner turmoil and her search for meaning and purpose in this brave new world, a theme that will resonate with some fans, and perhaps less so with others.

Thankfully, the ruthless Galactic Empire didn’t succeed in crushing her spirit (quite the opposite) and by the time we’ve turned that final page, it’s clear that we’ve witnessed the first step of Ahsoka’s journey towards becoming the self-assured, driven woman we see on Star Wars Rebels. 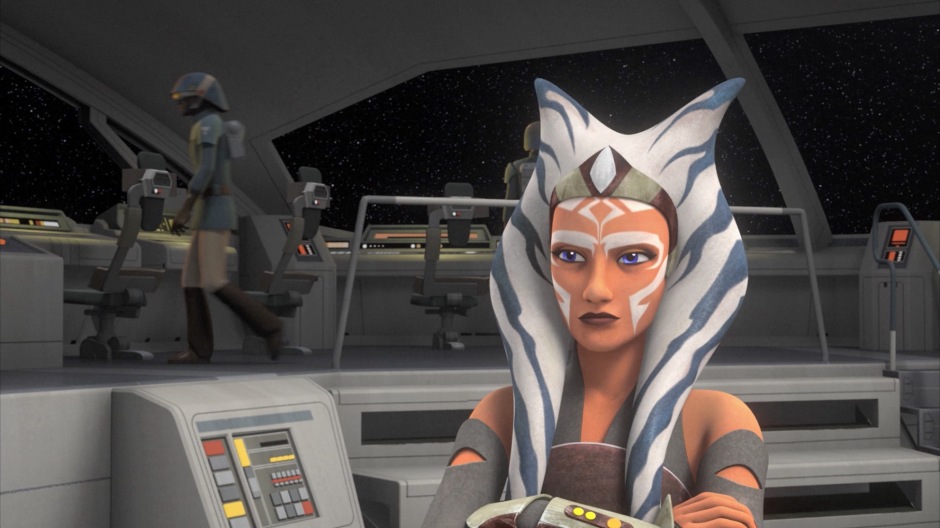 A Few of My Favourite Things:

I’ll be discussing certain topics and events at length at some point but, for now, here’s a brief summary of the things I really liked about this novel:

Order your copy of ‘Star Wars: Ahsoka’ on Amazon

Order your copy of ‘Star Wars: Ahsoka’ (Audiobook) on Amazon

Order your copy of ‘Star Wars: Ahsoka’ on Amazon UK

E.K. Johnston’s Star Wars: Ahsoka is a relatively satisfying character-driven novel that, for the most part, does justice to this beloved fan favourite and answers some of the pressing questions on fans’ minds. The main story takes some time to get off the ground and it’s populated by largely forgettable secondary characters but the flashback scenes, interludes, and final third of the book make up for it and will leave you begging for more.

And while the novel may not live up to every fan’s expectations, not even mine, Star Wars: Ahsoka is a solid entry in the new Star Wars canon and will hopefully pave the way for other novels (or other media) starring our favourite former Padawan.

Note: This review was updated on January 11, 2019, to include some new thoughts I had on the novel and links to articles and material published months, even years, after my original review.